My homestay called HAPPY INN, located just next to Ubud Market. I will recommend this place to friends & family. It was only SGD24 a night, it came with a tasty omelette for breakfast, clean room, wifi, beautiful architecture Balinese house, and a very cute yet naughty host called Ruben. (´♡‿♡`)

I had few hours (from this morning until 11AM) before my friend Sil and the gank picked me up to Alila, the wedding venue of Mar & Rob. So let’s explore some more around the homestay! ヽ(o＾▽＾o)ノ

Ruben the cute host, kept me company while waiting for my pick up.

Happy Inn Homestay at the heart of Ubud Central.

There were soooooooo many things to see and to haggle and to buy at Ubud Market! I bought this ratan handbag for IDR200k. But I think I should’ve get it cheaper around IDR160k or IDR180k. But IDR200k was good enough for me, since my colleague told me she bought the old version of the bag for IDR250k. (o´∀`o)

The market wasn’t too crowded in the morning. I walked strolled around for less than an hour, tried my best not to buy too many things since I only bring 1 small suitcase which already been full with the bridesmaid’s dress, shoes and bag. Also bikinis. A lot of bikinis even though I know I wouldn’t had time to swim. ♡(｡- ω -) 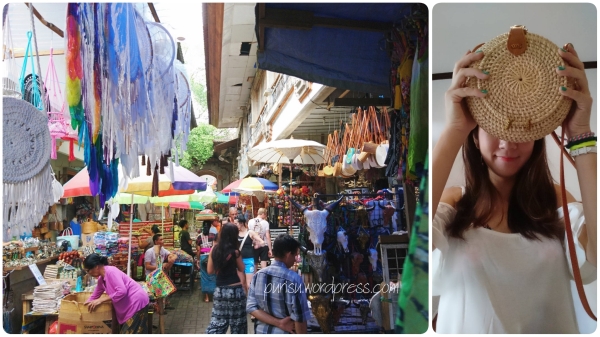 Stop by at Puri Saren Agung

Ubud Palace or known as Puri Saren Agung is an old historical but charming palace located just opposite of Ubud Market. It only took about 15 minutes to walk around the palace and there was no entrance fee. ╰(*´︶`*)╯

The palace was the official residence of the royal family of Ubud. It was on his travels that Rsi Markaneya received a divine revelation that in Bali he was to bury five precious metals on a mountain slope where the mother temple of Besakih now stands today. Along with a group of followers, Rsi Markaneya was magnetically attracted to a destination located in the central foothills of the island that radiated light and energy.

World War II brought hardship to the island and Ubud suffered considerably. The Japanese invaded and this was later followed by a violent struggle against the Dutch for independence. Indonesian people gained its freedom and its first president in 1945, but some 20 years later a so-called ‘communist coup’ saw thousands of murders across the archipelago. Many lives were stolen, especially in Ubud and it is local folk lore that the white egrets inhabiting the area of Petulu are actually the lost souls of those who were massacred.

After almost 20 years of uncertainty, tourism resumed in Ubud during the 1970s when backpackers and hippies set out to seek new experiences. A steady flow of visitors have since found themselves captivated by the intense beauty of the landscape and gracious hospitality of its people. Ubud has managed to embrace the 21st century with dignity and still retain its timeless artistry, culture and religion. It is a significant destination blessed with a strong sense of community and rare spiritual energy.

Check here to know what wiki said about this charming palace. 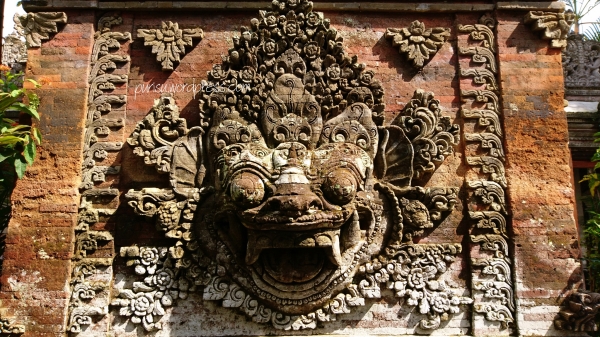 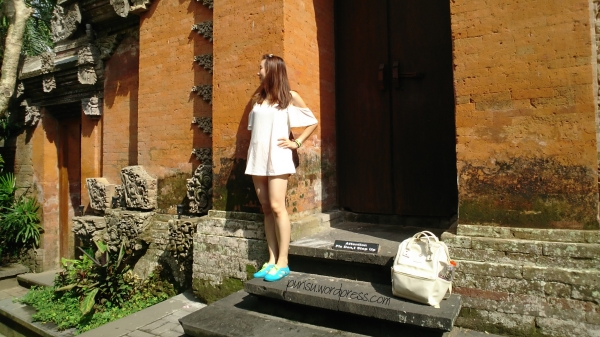 some poses at the famous Palace.

Hiding out from the heat at Tukies Coconut Ice Cream!

I found this coconut ice cream stall from Google. I walked pass it yesterday night when I was looking for tickets for night performance. And since I still had time while waiting for my pick up, I decided to stop by and tried their famous coconut ice cream… And boy it was great!! Much better than coconut ice cream I had in SG and it was only IDR28k for 1 scoop! ♡ ～(‘▽^人)

And don’t forget to buy their coconut jam too, I bought 4 in different sizes. (ღ˘⌣˘ღ) 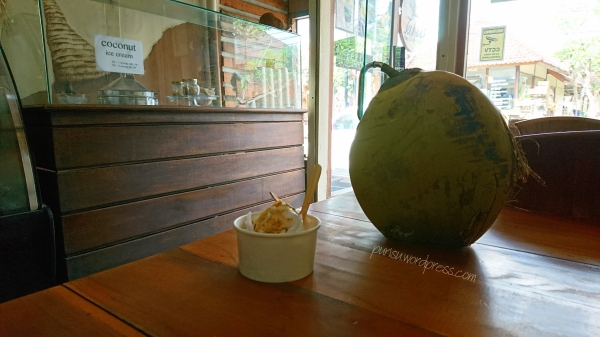 By around 11:30AM, Ruben the cute host were bored chewing my fingers and decided to run away somewhere else. And not long after that Sil and the gank came and pick me up to Alila. We stopped by at Naughty Nuri’s on the way to Alila, we had the famous pork ribs then all headed to Alila for Mar’s big day. ♡ (⇀ 3 ↼)

One night at Alila Ubud.

Alila was one of the hidden gems of Ubud. The villa offers a very beautifully green valley with–again–Balinese architecture. And beautiful pool facing the forest! I didn’t have enough time to walk around the complex, but I quite enjoyed the scenery and the luxurious room I had with Sil. ヽ(≧◡≦)八(o^ ^o)ノ

look at how the hairstylist did for my hair!

Started at 7PM and finished around 11PM, the wedding went well. It was a private wedding there were only no more than 40 people gathered around the pool. For me personally, I wouldn’t choose outdoor wedding at night. Not only because we couldn’t appreciate the scenery, but there were also a lot of night insects attracted by the candles and they would go to our drinks and food as well. It was quite annoying, but I was saved and protected by a gentlemen sitting next to me. (/▽＼*)｡o○♡

Around 11PM when most of the guests had left the venue, I decided to go back to my room because I need to left the villa early in the morning and I had a quite tight schedule tomorrow. ♡( ◡‿◡ )

I walk to my room 114 alone, and it wasn’t a smart decision. Our room was facing the forrest. It means I walked along between the forrest (on my left-hand side) and the row  of villas (on my right-hand side). I remember I just need to follow the path, my room just next to a step. But I couldn’t find it, and the path was getting darker and darker and the bird’s sound was getting creepier and creepier. Finally I decided to walk back to the wedding area and asked one of the staffs to help me find my room. Once again I was saved. (´ ω `♡)

Oh inside the room, while wiping off all the make up and waiting for Sil to come, all the lights suddenly went off. It was only for few seconds but I made me terrified. Out of all the hotels I have ever stayed, this was the second creepiest (after the Bangkok hotel). I don’t mind to stay in this hotel again, but I have to make sure I have company so I wouldn’t be freaked out if the lights went off or I heard creepy sounds coming from the forest. ･ﾟ･(｡>ω<｡)･ﾟ･