I arrived in Bangkok before 11am. Followed the way to airport exit, I found this limousine stall that offered me a ride to my hotel for 1200B. I was in shocked because from the info I got, it said the price from airport to hotel was only 300B to 400B depends on the traffic jam! I supposed this was my very first Bangkok-scam, so I showed them my map with the information I got. And apparently they said it was because they are limousine so they offer higher price. Well, I wonder how many person travel with limousine in Bangkok when taxi is 3 or 4 times cheaper. (；⌣̀_⌣́)

Anyhow, from the limousine stand, I went downstair to the basement and finally found the taxi queue with the help from 3 hunky men. Apparently there was a taxi queueing machine that we should get before a taxi will stop for you. Raising your hand and ask a taxi to stop for you is not working in this airport. So might as well just join the queue to get the taxi number. Lucky for me, the line was empty and there was no queue that time.

The journey from the airport to my hotel which located in Surawong road, was about 50 minutes – it was Thursday mid-day, no traffic jam. And remember when you get into a taxi in Bangkok, always asked them to turn on the ‘meter’. Even there was a ‘meter’ sign on top of the car, but it doesn’t always mean the driver will turn on the meter for you, except you asked for it. The funny thing about this taxi driver who took me from airport to hotel, the meter said I must pay 230B, but he doesn’t have small changes! I gave him 1000B, he said he doesn’t have change. Then I gave him 500B, still no change. I gave him 300B. still no change! This can’t be serious! How can a taxi driver doesn’t have small money at all! Is this my second scam??! Lucky there was another passanger waiting for a taxi outside the hotel, and she gave small changes for me. ＼(￣▽￣)／

The picture shown above was the lobby of the hotel, Kokotel. My room at the 7th floor, and cute origami found on the bed. Please don’t forget to download this very important map! This map was so handy. Just show this map to the driver, and most of them will roughly know how to get there. (o´∀｀o)

This was the cutest hotel I’ve ever stayed! The sheeps statue at the lobby, sheep decorations all over the place, paitings on the wall, origami, all those cute sheeps really made my day! It instantly cheered up my solo travel, I really enjoyed this cute theme, and it’s on my budget too! And of course I will definitely give good scores for them on tripadvisor later! ヽ(♡‿♡)ノ 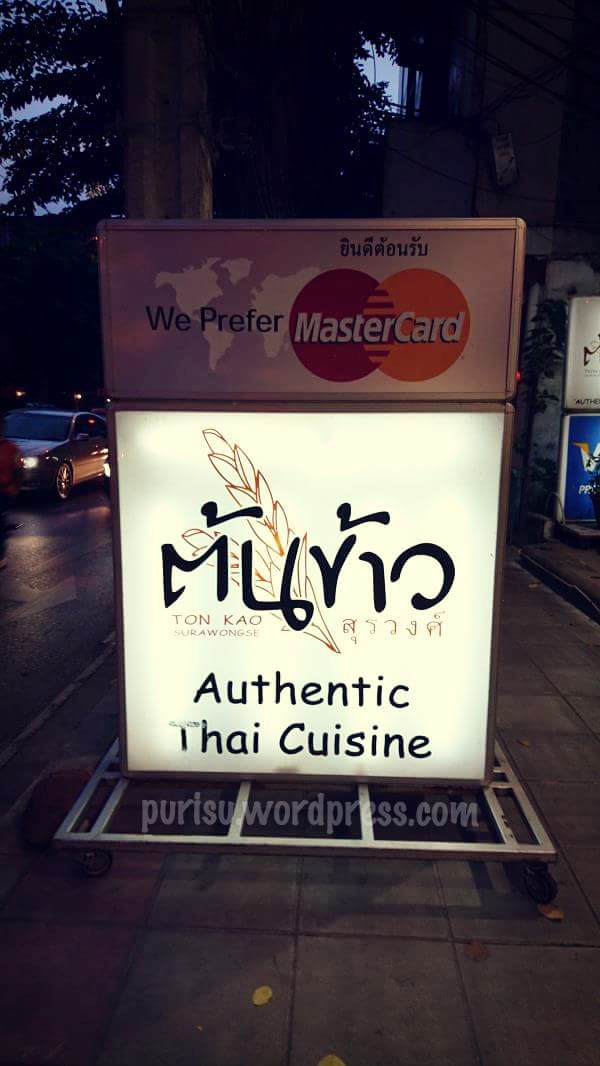 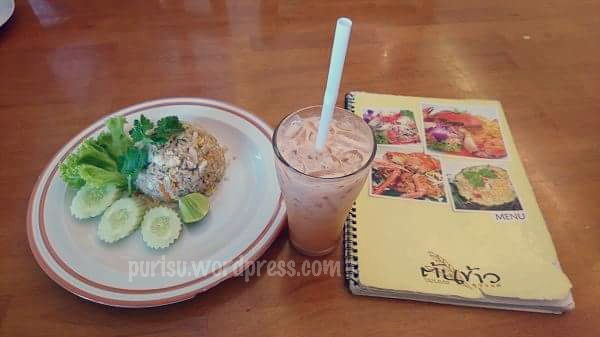 I was supposed to go Somboon Restaurant–the recommended seafood restaurant at Surawong road, but they only opened at 4pm. So I walked along the surawong street and found this yummy local restaurant instead, called Ton Kao! It was just about 400 – 500 meters away from the hotel. The fried rice was nice, and thai ice tea was superb–the only drink you supposed to order in Thailand other than coconut. Surprisingly it wasn’t expensive at all! And the waitress were all friendly, always smiling and gave me that Thai greeting hand-sign which made me feel warm and welcome. (o˘◡˘o)

After the engine fuelled, I’m ready to continue with my long walk. My next stop was Lumpini Park. But before that, I stopped by at the local famous store NaRaYa who sells cute hand bags and flowery hats, then I stopped at the local café shop called Coffee Design lured by the ‘free wifi’ sign at the door to have myself a cold oreo drink in this sunny day and also sent some random messages to mum just to make her not to think I skipped work. (*/▽＼*) 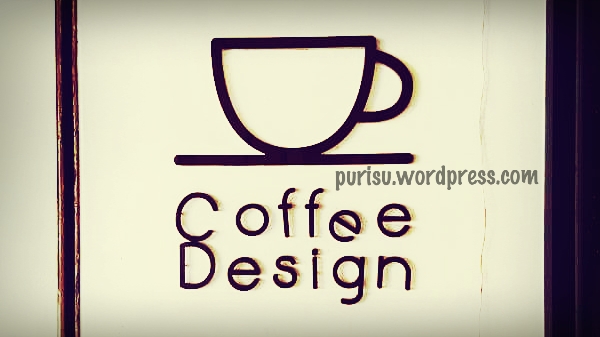 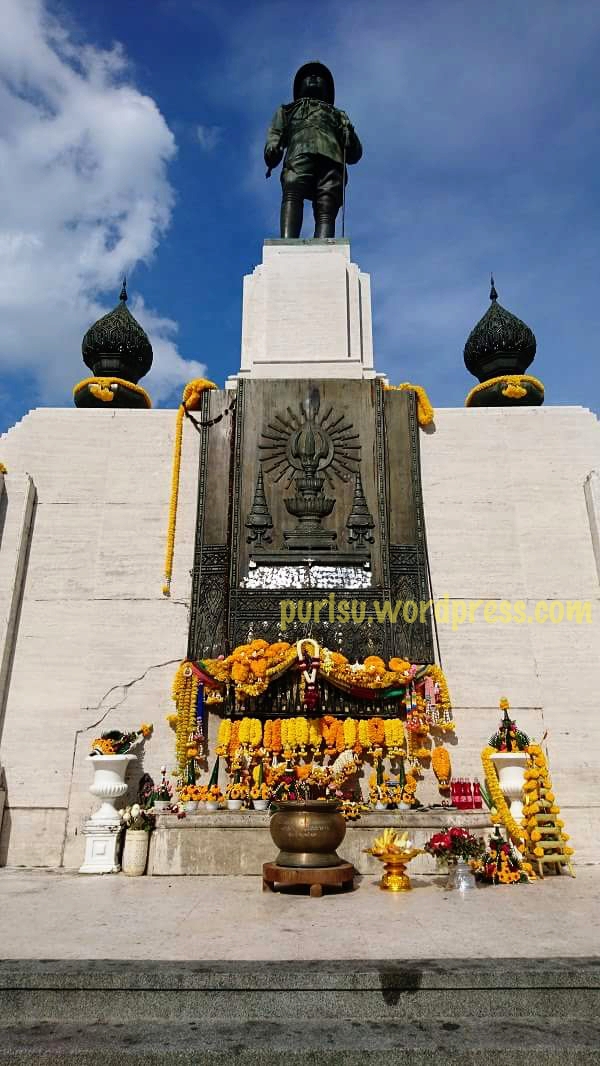 Lumpini Park (สวนลุมพินี) was created in the 1920s by King Rama VI on royal property. After World War I, it was rebuilt into the first park in Bangkok. In World War II the park was a Japanese Army camp. A statue of the king stands at the southwest entrance to the park. It was named after Lumbini, the birthplace of the Buddha in Nepal, and at the time of its creation stood on the outskirts of the city. Today it lies in the heart of the main business district and is in the Lumphini sub-district, on the north side of Rama IV Road, between Ratchadamri Road and Witthayu Road.

It was very green and relaxing park, a lot of birds too, but I didn’t have much time since I had to rush to the church accross the park. I walked diagonally from the park entrance to the exit. There was a school at the park exit, and from the school, turned left, walked to the traffic light, cross the street diagonally with the bridge, then turned right to Soi Ruam Ruedi road. If you see Neil’s Tavern on your left hand side, it means you’re on the right track to the church. Just go straight. The church is just at the end of this road. ( ´ ▽ ` )

Important note if you travel alone and you think you don’t need internet 24/7, please to always bring along your itinerary. This itinerary must contains all the places you want to visit, including their names in english and in local language. Also with the exact address. But note that not everyone familiar with the name or the address, don’t forget to snap a picture of the place you want to visit and if you’re not so sure about the direction, you can always ask someone and show them the picture. Showing someone the name in local language, address and picture will help alot! 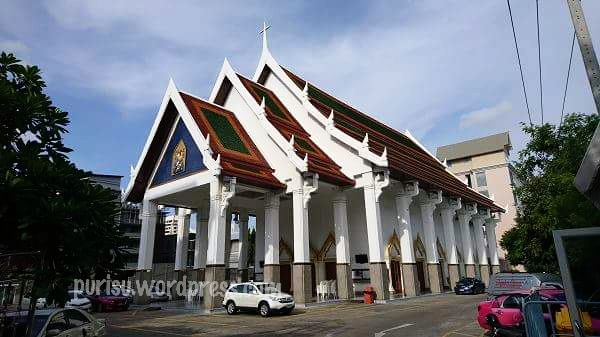 If you want to know more about this Holy Redeemer church, please visit my other blog at Catholico. I’m not going to talk much about this church here.

From the church, I walked back to hotel; stopped to buy some cute cakes at Neil’s Tavern, crossed the same park and spent about 15 minutes to enjoy the lake view, then walked back to Surawong. I stopped by at Pat Pong road, one of the famous Night Market at Surawong road. I left the night market before the sunset at 7PM, since my colleague told me that area is not so safe for a single female traveller at night. (￣ω￣)

Arrived back at my hotel room, that weird feeling came back at me and I told myself, “I’m not going to spend 5 nights alone in this room!” That horror stories from my friends suddenly creeping me out; the shower, the tap water, television and everything suddenly became so eerie to my ear. I know that I have to always trust my gut instinct! Panickly I called the room service and asked if there’s any other room available oright now, otherwise I had to move to another hotel. They helped me move to 6th floor, just below the previous room. The room was quite similar, but at least this room didn’t’t have any weird feeling. (*¯︶¯*)