Following our own itinerary, we headed outside Taipei. And oh! Before that, early in the morning, after the post office across our hotel was opened, we went there to post some post cards (remember I have this habit to send post card to my dad during my holiday abroad) and I bought a very beautiful post stamp! I had this love at first sight with this 3d post stamp! (♡ﾟ▽ﾟ♡)

To make it easy to explain, here is our route >> From Ximending station exit-5 (next to Post Office) we went to Taipei Main Station by MRT. From there we bought train ticket to Ruifang. From Ruifang we went off the station, walked to the bus stop for about 200m and took bus to Jiufen old street. From Jiufen after we strolled around and bought some souvenirs, we took another bus back to Ruifang train station, and took train to Shifen. From Shifen (after we flew a big lantern and some selfies at the Jingan Suspension Bridge) we took train back to Ruifang station and continued to Taipei Main Station. 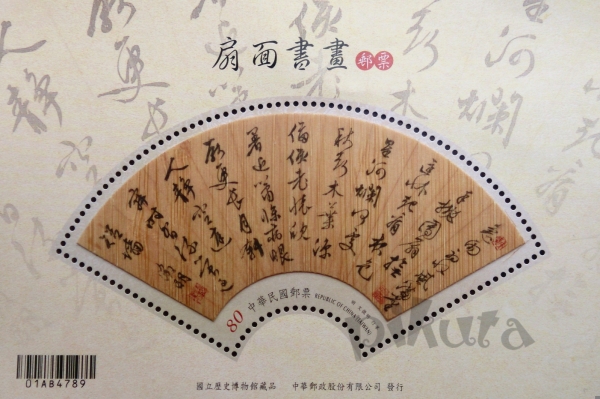 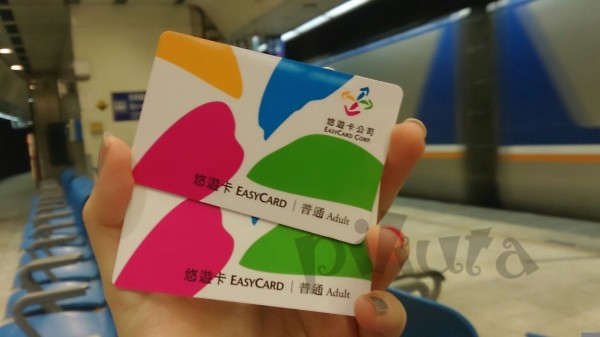 Oh did I tell you I bought the easy card at Taipei Main Station the first day we arrived? It’s a very handy card (same as Ez-link card in Singapore or Icoca card from Osaka); you can use it for travel by MRT, local trains and buses, also to buy stuffs at some mini markets. This is a must-have item when you travel to Taiwan. If I wasn’t wrong, we bought it for 700NTD with 500NTD balance inside the card. We can always top up at every train station and refund before we leave Taiwan (but I decided to keep the card anyway as souvenir). 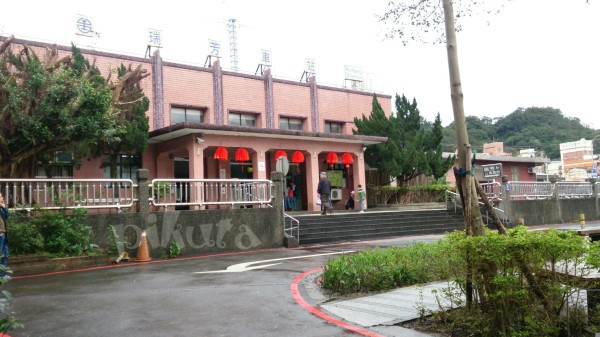 It was quite a long journey from Taipei Main Station to Ruifang (about 1 hour?) Luckily we managed to grab a seat and rest. We finally arrived at this pinky Ruifang Train Station (瑞芳車站) and we went off. It was drizzling outside, so we run to the bus stop just across the train station hall. But apparently it wasn’t the correct bus stop to Jiufen. We had to cross the street and walked up for about 200m, the bus stop was on the other side of the road. It was really helpful to have someone speak Chinese in Taiwan! (っ˘ω˘ς )

The bus arrived after 10 minutes of heavy rain we waited at the bus stop. The journey from Ruifang to Jiufen was about 45 minutes, a very snaky road. Again, we were lucky to have the seat at the back, and enjoyed our journey to the famous old street of Taiwan. (*ﾟ▽ﾟ*) 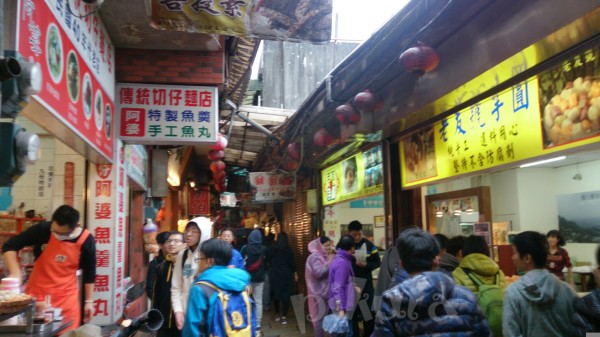 local foods all around the horizon! 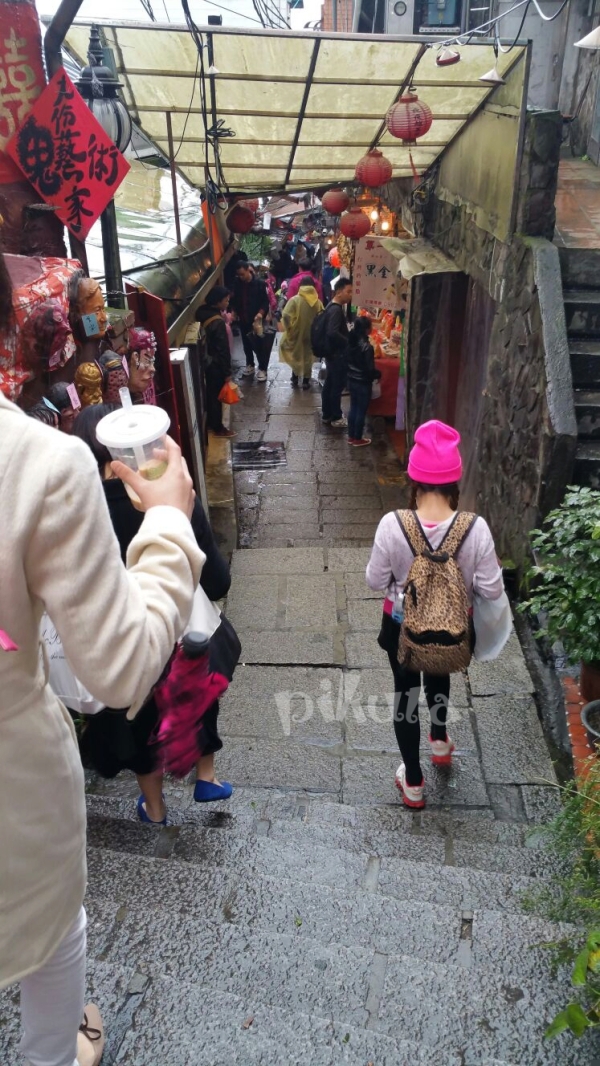 a very cramped and crowded, slippery and a lot of stairs! 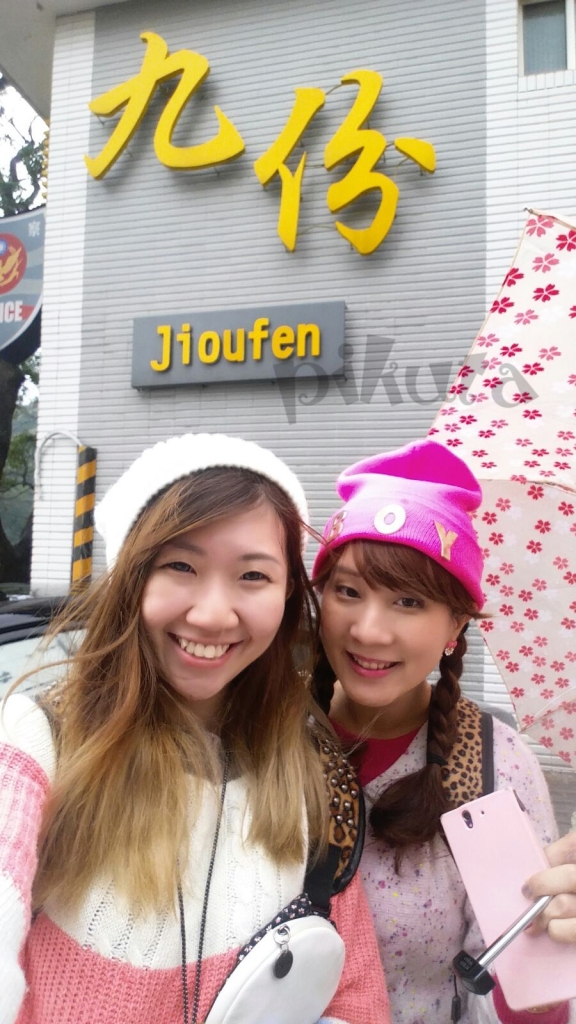 some wefies here and there…

Jiufen Old Street (九份) is a mountain area in the Ruifang District of New Taipei City near Keelung, Taiwan. Despite the earliest reference to the production of gold in the island dating to 1430, and multiple rediscoveries by early inhabitants, visiting Japanese, Dutch occupiers, and Koxinga’s retainers, awareness of the wealth of Taiwan’s gold districts did not develop until the late Qing era. In 1890, workmen discovered flakes of gold while constructing the new Taipeh-Kelung railway, and in 1893 a rich placer district was discovered in the hills ofKau-hun that produced several kilograms of gold a day. In the next year, the promise became greater than ever after a Chinese “expert” with experience gained in California found gold-bearing quartz in the said hills.

As I said before, it was raining all day long! The old street was very crowded full of people and slippery because all wet! But I found it funny how a lot of local people here in Taiwan can speak a bit of Japanese and suspect me was a 日本人. Well, I believe my Japanese speaking level was enough to convinced them. Lol. <(￣︶￣)>

I bought some souvenirs for my mom–it was a colorful crystals, we tried pork sausage, local pork rice restaurant, bought some rice crackers, grabbed a free hot alishan tea, bought our own hot tea, took some wefies and we walked all the way down the slippery staircase to the bus stop and continued to our next stop. (´｡• ᵕ •｡`)

Bus journey from Jiufen to back to Ruifang train station was about 45 minutes, but we weren’t so lucky this time as we didn’t get any seat on this snaky journey. We hopped to the bus full with Japanese students (same group of students as the bus we took from Ruifang this morning) and their tour guides. Since my friend can speak Chinese, we asked them where was our bus stop to Ruifang station. So again, we were saved for the day! ╰(*´︶`*)╯

Off from the bus stop and walked back to Ruifang Train Station, my friend went to information center and asked the lady for our train to Shifen. The next train (Pingxi Line [平溪線]) to Shifen arrived in 3 minutes, and the next one will be 1 hour later. We rushed to the platform, and we were lucky to got the train and sat on the train floor, at the very back of the train car. I had this privilege to enjoy the scenery from the window, so I’d better record this beautiful scenery. But I didn’t know how to upload video here… (´-ω-｀) 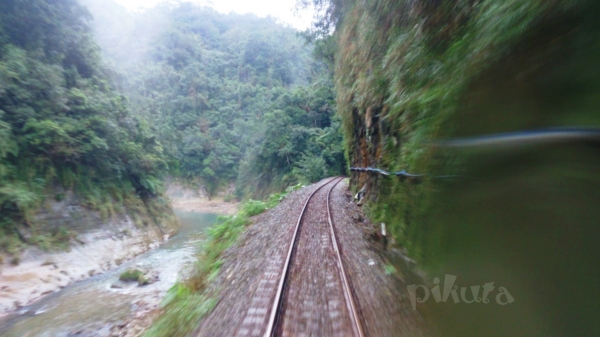 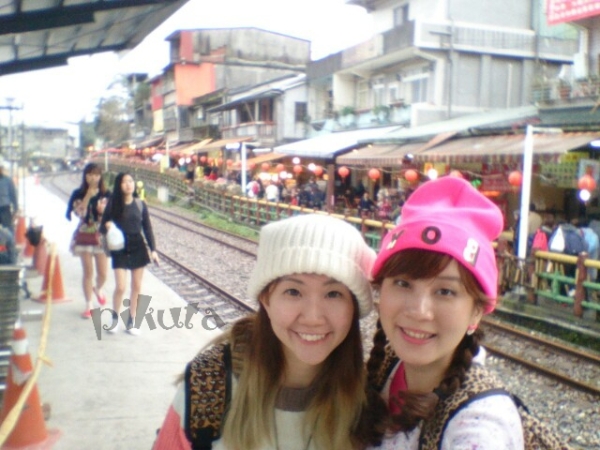 Shifen old street, here we are!!

It was a very beautiful scenery Taiwan could offer and I enjoyed it very much. About 45 minutes later, we arrived at another famous place, Shifen Old Street [十分]. Located in Pingxi District of New Taipei City, Taiwan, Shifen Old Street is the most famous stop along Pingxi Line [平溪線]. Shifen Old Street is filled mainly by sky lantern and souvenir shops, grocery stores and restaurants on both sides of the railway. Although Shifen Old Street is now a popular tourist stop, the old street still keeps its nostalgic, relaxing ambience, where one may sometimes find residents sit in front of their houses, chatting and socializing.

On the other side of the train tracks, we could see a very beautiful blue mountain under the silver sky. And yes! the rain has stopped, so we could flew a big sky lantern to the sky. We stopped by at Platform cafe to sipped hot drinks in this cold weather. The weather was only 12 or 14 °C, it was quite windy but luckily my flu was better today. (´｡• ω •｡`) ♡ 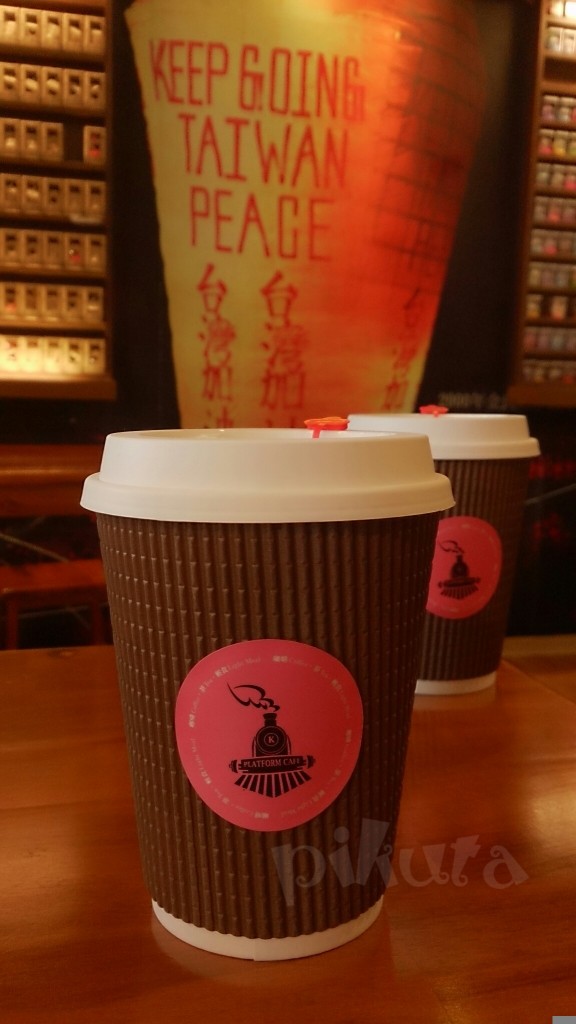 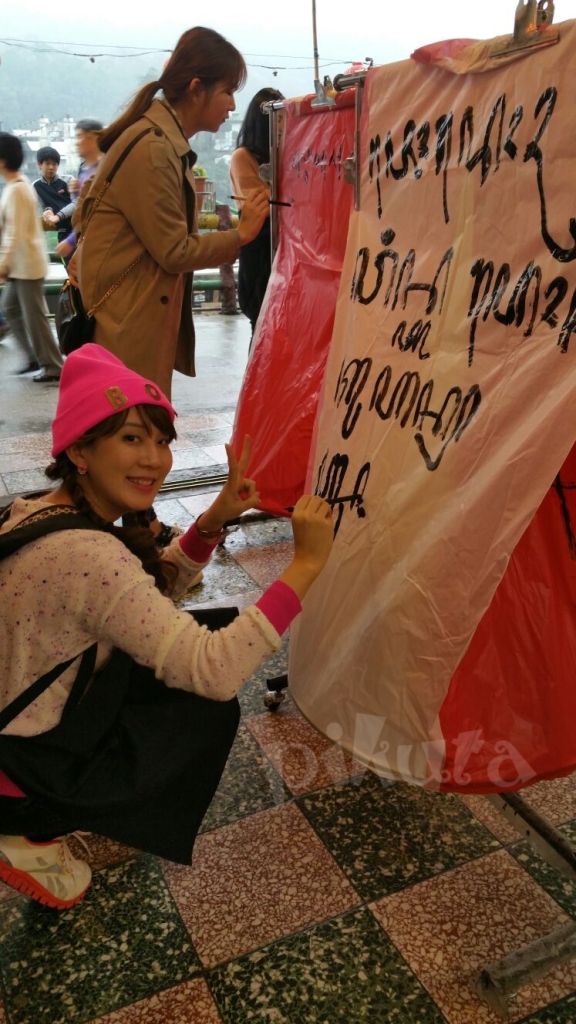 my wishes on the lantern 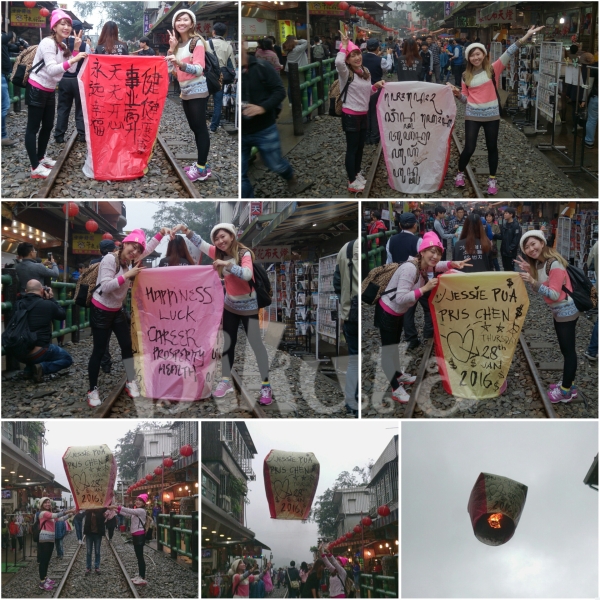 our sky lantern full of wishes!

It was such a fun experience, then we continued walked to the famous Jingan suspension bridge. Jingan Suspension Bridge is 128 meters long; it’s the longest bridge in the town of Pingxi. Shifen Mining Company built Jingan Suspension Bridge in 1974; it was used for coal transporting purpose. The bridge had two major refurbishments in 1993 and 1998. It has been a popular place for visitors, just by standing on the bridge; you can clearly see the Ping-Shi Old Street and Jilong River. 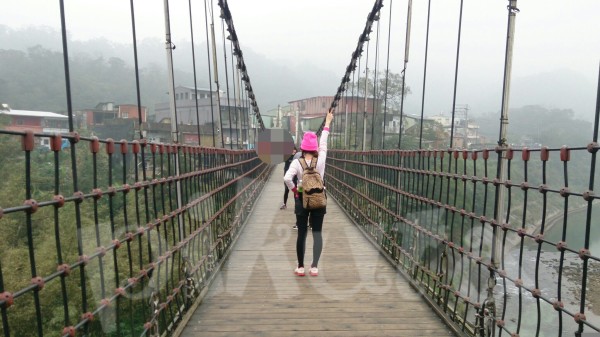 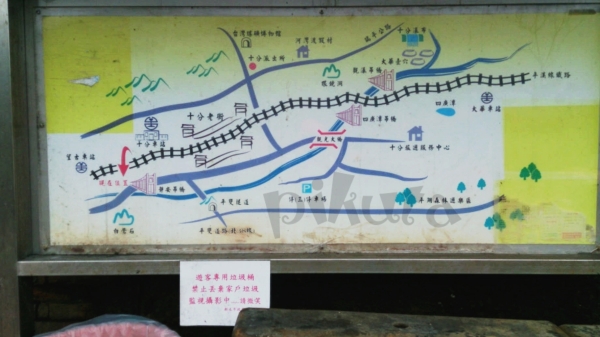 map of Pingxi. Maybe helpful for those who can read Chinese 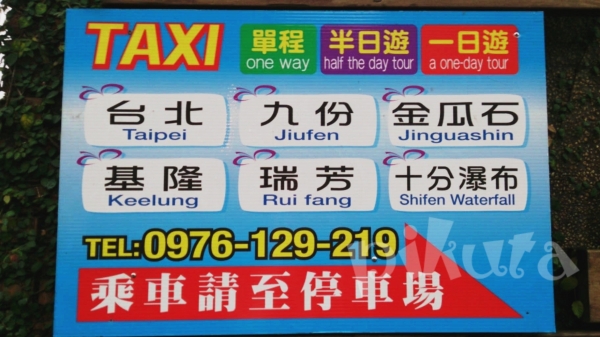 Nearby the bridge, there were some taxis waiting for passengers to town. The taxi price to town was double the train price, so obviously we chose the cheaper one.

The train was already waiting for us after we finished selfie session on the bridge. We rushed to the train. Again, we were lucky to got this ride otherwise we need to wait for another hour back to Ruifang. I guess this was our lucky day! ☆ ～(‘▽^人)

From Shifen to Ruifang, we didn’t have to tap out our easy card, but continued to other platform to Taipei Main Station. It’s better to ask people around. I believe the tourist information can speak English, although I didn’t try to talk with the lady. From Taipei Main Station, we took MRT down to Taipei 101 World Trade Center Station, red line.

It was almost 7pm by the time we arrived at one of the tallest building in the world. Taipei 101 [臺北101] formerly known as the Taipei World Financial Center – is a landmark supertall skyscraper in Xinyi District, Taipei, Taiwan. The building was officially classified as the world’s tallest in 2004. Taipei 101 was designed by C.Y. Lee and Partners and was constructed by Samsung C&T and KTRT Joint Venture. The building was architecturally created as a symbol of the evolution of technology and Asian tradition. Its postmodernist approach to style incorporates traditional design elements and gives them modern treatments. The tower is designed to withstand typhoons and earthquakes. A multi-level shopping mall adjoining the tower houses hundreds of stores, restaurants and clubs.

After we had dinner at the ground floor food court center, we went up to level 5 to buy ticket for the observatory deck. It was windy so the official must shut the door to level 91 (the highest level they usually open for tourist), and only allowed us to go level 89 and 88. <(￣︶￣)>

The elevator went up from level 5 to level 89 within 37 seconds, very impressive!! But it was dark and raining outside, we couldn’t see anything from level 89. So we just walked around, bought some souvenirs and more post cards for me, took some selfies. After 40 minutes or so, the rain stopped and we could see the city light clearer. But I would suggest to visit Taipei 101 during day time. (´｡• ᵕ •｡`) 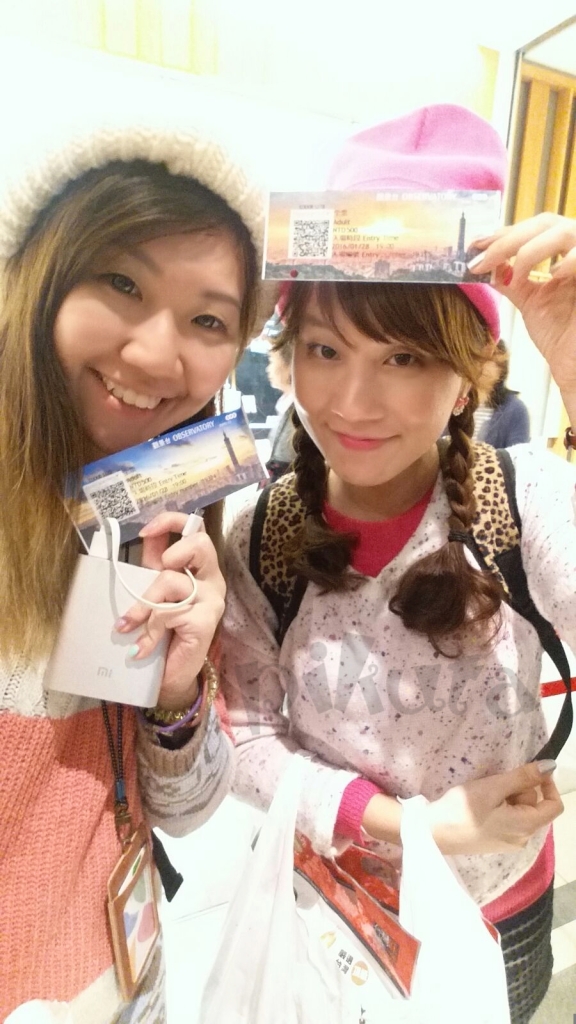 us joined the queue to go level 89 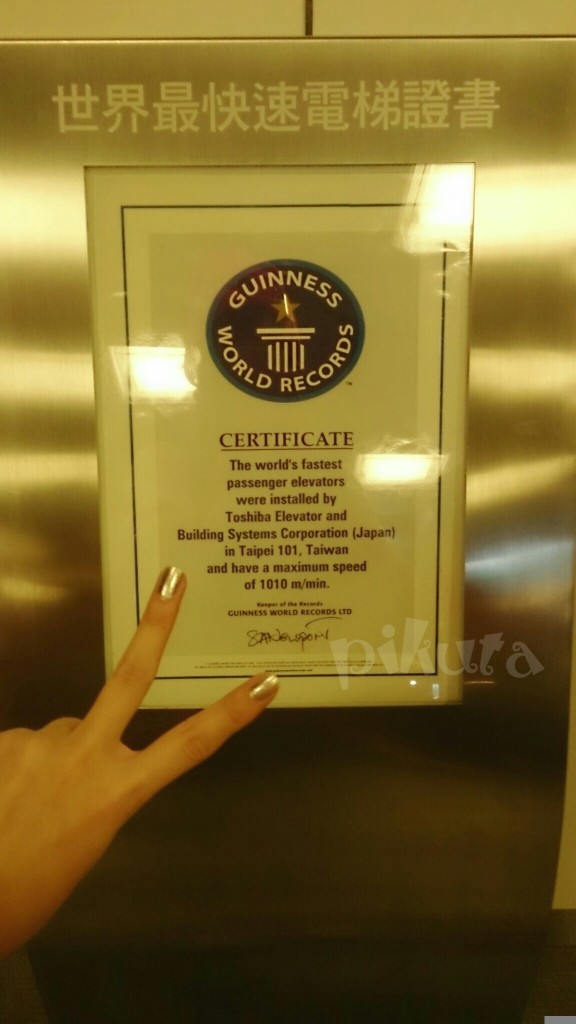 cheers to the world’s fastest elevator!! 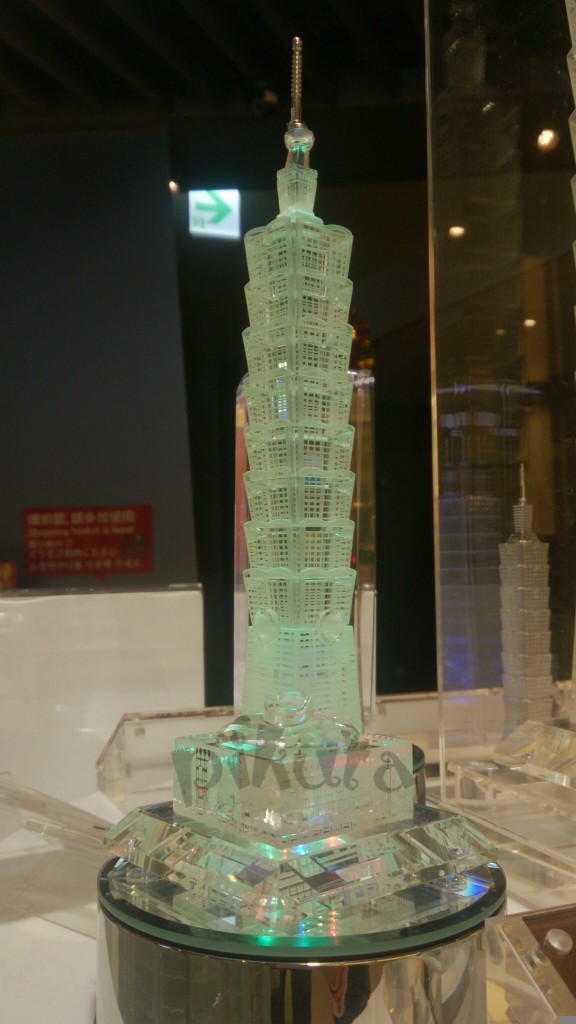 From Taipei 101 we headed back to Ximending, we called it a night.

What a long and beautiful day we had! Although it was raining almost all day, but we managed to go places following our itinerary. We enjoyed it very much and soooo tired. See you tomorrow! ☆*:.｡.o(≧▽≦)o.｡.:*☆